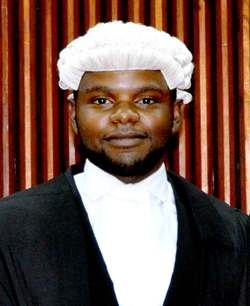 Proud smiles were displayed throughout Courtroom Number One on the morning of 6 September 2016 as Mr. Brando Rankin was admitted as an Attorney-at- Law of the Cayman Islands. Mr. Justice Williams, who presided over the proceedings, said it was a privilege to be the sitting judge for such an occasion, particularly as Brando is a Caymanian. Kyle Broadhurst, a partner at Broadhurst LLC where Brando recently completed his contract as an Articled Clerk, moved the application to have Brando admitted. Mr. Broadhurst told the Court that he had found Brando to be a hardworking and compassionate individual and that he had no doubt that Brando would be a fine addition to the honoured profession.

After accepting his wig and gown, the formal court attire worn by attorneys in the Cayman Islands, Brando addressed the Court for the first time. He quoted Sir Winston Churchill, making the sage point that “success is not final, failure is not fatal: it is the courage to continue that counts.” He noted that “this day was not easily achieved” referencing the difficult process required to become an attorney. He went on to thank his mother, Marlene Rankin, as well as others who played a significant role in his achievement.

Brando will now take up his position as an Attorney at Broadhurst, where he will develop his practice in the areas of property, commercial law and litigation.